Garret FitzGerald was born in Dublin in 1926 into a very politically active family. His father was the First Minister for External Affairs in the first Irish Government after Independence. His Mother Mabel Washington McConnell, was a nationalist and republican of Ulster Protestant descent. Garret would lalter say that his political ambition was the creation of a pluralist Ireland where the norother Protestands of his mother's family tradition adn the southern Catholics of his father's could feel equally at home. 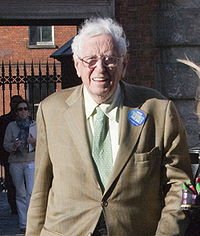 with a Bachelor of Arts degree in 1946, later returning to complete a Ph.D. which he obtained in i1968.

Following on from his university education, in 1947 he started working with Aer Lingus, the state airline of Ireland, and became an authority on the strategic economic planning of transport. During this time he wrote many newspaper articles, was the Irish correspondent for the Economists Magazine. He remained with Aer Lingus until 1959, when after undertaking a study of the economics of Irish Industry in Trinity College, Dublin, he became a lecturer in edonomics at University College Dublin. He also qualified as a barrister

Garret entered politics joining Fine Gael. He placed himself in the liberal wing of Fine Gael, which rallied around the Just Society programme weitten by Declan Costello. He was elected for Dublin South East constituency in the general election of 1969. After the election of 1973 he was appointed to the poast of Minister for Foreign Affairs.

In 1977 his party lost the election and following this he was appointed the leader of the party. He set about modernising the party. When the country went to the polls again his party won the election and he became the Taoiseach (Prime Minister). He was Taoiseach twice, from 1981 -82 and then a few months later from 1982-87. He had two major problems to face a failing economy and the problem of Norther Ireland.

Garret retired as leader of Fine Gael immediately afther the election by the Dail of Charles haghey as Taoseach. He then wrote his autobiography All in a life This was published in 1991 and it became an immediate best-seller. After this he wrote a weekly column every Saturday in The Irish Times. Just before his death he had met up with one of the Housetop Team and had agreed to write an article in the The Irish Timessupporting the work of Housetop and the cause of women priests in the Catholic Church.

Garret FitzGerald was a patron of www.womenpiests.org. He believed in equality for women and for greater participation of women in the life and governance of the Cathotholic Church. He wrote numerous articles including the classic ‘Women Ministers in the Catholic Church?’ (1968).

For Garret FitzGeralds support as patron, we are grateful. May he rest in peace.