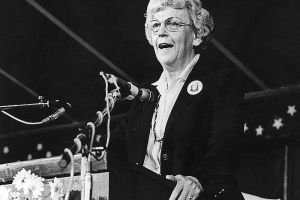 Patron of womenpriests.org, Catherina Halkes has died at the age of ninety. As one of the first professors in feminism and Christianity in the Netherlands, she is today hailed as one of the world's pioneers in Christian feminist theology. 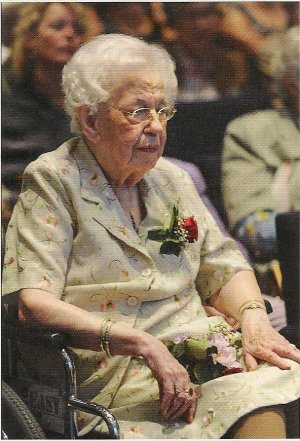 Catherina had a sad childhood. Her father died suddenly when she was ten, her eldest sister had multiple sclerosis and died eight years later. Her Mother had poor health and died shortly before the end of the war. With her older sister she moved to Leiden, where she started to study English and Dutch.

Catherina gradually became more interested in Pastoral Theology rather than teaching languages. In 1957 she became deputy director of the national training institute for pastoral workers "Maartenshof" in Breda. In 1970 she was appointed research assistant in the Department of Pastoral Theology in the Theological Faculty at the Catholic University of Nijmegen. In 1977 she was appointed lecturer in feminism and Christianity.

From the late sixties, Catherina began to advocate the ordination of women. In 1982 she received an honorary doctorate from the American University of Yale. In 1985 she was in the international news, as Cardinal Simonis forbade her to speak in public during a visit of Pope John Paul ll the the Netherlands.

Catherina was a devout Roman Catholic who became active in the women's movement in the Church. Through her writings and lectures, she contributed extensively to groundwork for the women's ordination movement. Along with other leading feminist scholars -- Mary Daly, Gertrude Heinzelmann, Joan Morris and Ida Raming -- Catherina was affiliated with St. Joan's International Alliance, a suffrage group founded in 1911. In an article from our online library, Belgian writer Anne Marie Pelzer points out:

'the Alliance put to the Holy Father its first official request for women to become deacons (1961), then for lay men and women to be present at the Council, as observers and experts (1962). In 1963, it presented a very cautious and respectful resolution to the Pope on the admission of women to the priesthood.'

Catherina herself gained 'a measure of notoriety' when, as the spokesperson for Dutch Catholic Women's organisations and Professor of Theology at Radboud University of Nijmegen, she was forbidden by a Dutch archbishop to make an address to Pope John Paul II during his 1985 visit to the Netherlands.

Catherina was consistent in her criticism of the male dominance in the Catholic hierarchy, the family and society. She worked for transformations needed to dismantle patriarchal power and domination in the family, society and the Church. She contributed to opening the way for the world's -- and the Church's -- willingness to recognise women’s full humanity and being in the image of the divine. She helped develop feminist spirituality and encouraged women’s reflections on the sacred. Her contributions were enormous and the work continues on.

A biography about Catherina is expected at the end of 2012.

For Catherina's life and contributions, we are grateful. May she rest in peace.